Pythons Continue to be a Problem for the Florida Everglades 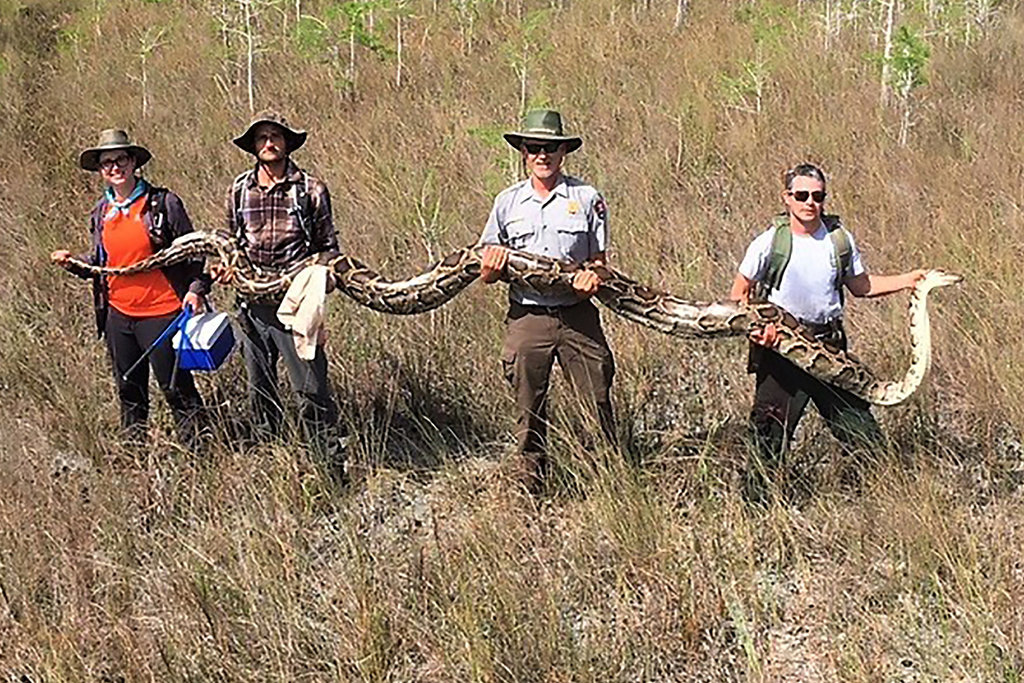 Earlier this year, a 17-foot Burmese python was found in Big Cypress National Preserve. The python was almost 150 pounds and it took four people to transport it out of the marsh. While this maybe alarming on its own, the bigger problem was the python was carrying 73 eggs!

The Florida Everglades have been enduring the mounting threat of the Burmese python for over a decade. The pythons are overrunning the wetlands and are a significant threat to native species. This increasing issue is of big worry for the conservation efforts of the “river of grass”. In fact, it’s been suggested that there are approximately 100,000 Burmese pythons in the Everglades. Furthermore, they have become a minimum viable population. In other words, they can exist in the wild without facing extinction from natural disasters.  Authorities are categorizing the pythons as Florida’s chief invasive species. Combative efforts to date include hiring of contractors, offering cash rewards, and even holding promotional contests to create awareness. That said, a female python can lay up to 100 eggs. According to the Proceedings of the National Academy of Sciences, mammal and bird populations have begun to decrease as a result of python proliferation.

How Did They Get Here?

Authorities point to two events when discussing the onset of the python invasion. First, some experts point to Hurricane Andrew that destroyed a python-breed facility and zoo near Miami. The escaped snakes spread and populated into the Everglades marsh. At the same time, more than 90,000 pythons were imported into the U.S. to support pet demand. However, many reluctant South Florida owners released the nonnative pythons into the Florida Everglades as a means of compassionate disposal. Moreover, this has only increased the numbers as the pythons can multiply quickly. As a result, the United States banned the importation of Burmese python in 2012. While Florida banned the Burmese python from ownership or sale, most of the damage had already been done in terms of harming the ecosystem. 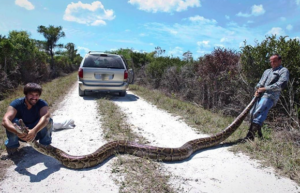 Pythons Are a Dangerous, Invasive Species

Fifteen years ago, an evening adventure in the Florida Everglades meant many sights and sounds of nocturnal mammals. Not so much anymore. The python proliferation has coincided with dramatic reductions in raccoons, opossums and rabbits, as well as, many other species. The pythons also happen to be good at hiding which makes them exceptional predators and difficult to catch. The snakes are literally eating the population around them and show no fear. For example, a video went viral in 2017, showing a battle between a 15-foot python taking on a six-foot alligator. It has also been reported that the snakes have made their way northward into other parts of Florida. While the Burmese python prefers the climate closest to its native lands in Southeast Asia, the hope is that a cold weather snap will curtail some of the reproduction.

The problem of the Burmese python has grown so large that Florida Fish and Wildlife Commission has created a python patrol program. The program offers no-cost training program that aims to create a network of trained individuals throughout south Florida who know how to identify Burmese pythons, report sightings, and in some cases, capture and humanely kill the snakes.